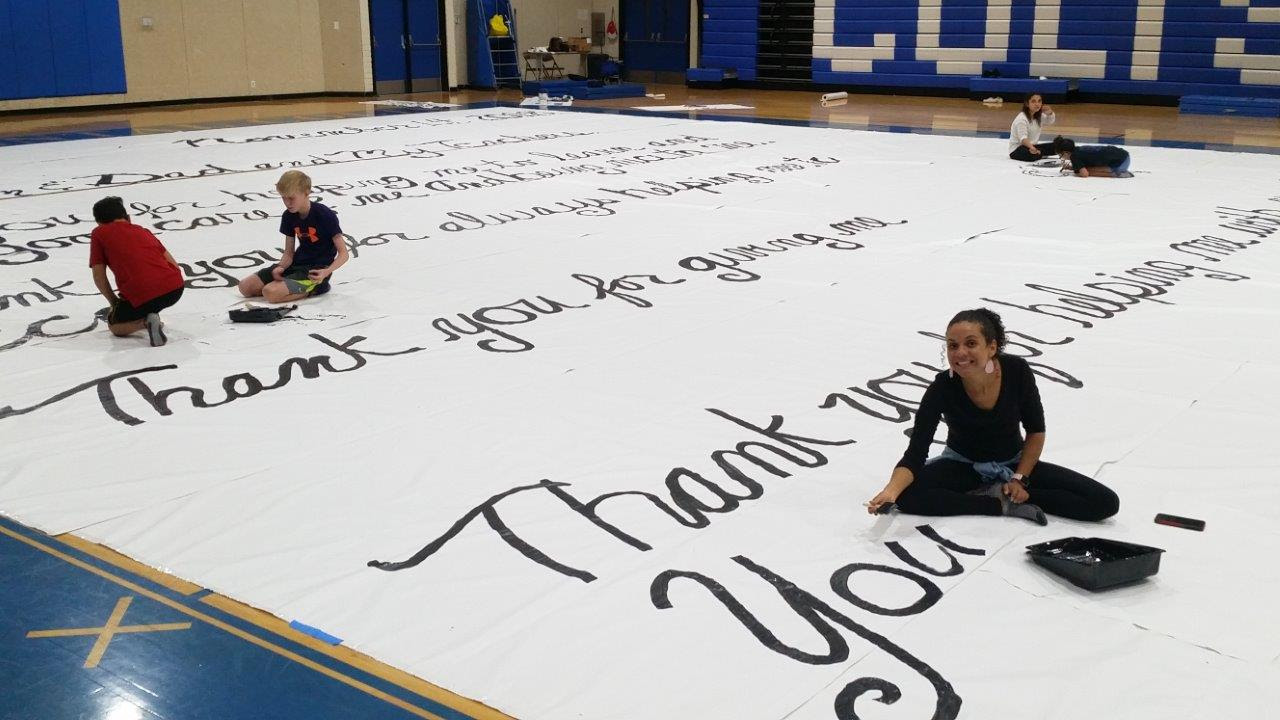 “Letters are real. They are made of paper and the paper holds the time that you place into the words.  And the paper can be held.  It is human-sized and made for hands to hold and touch—and feel.  It is not electronic or made of electrons.  And because letters are real, they can be saved and cherished for a long time. And you can always feel the person in the way they write—even long after they are gone.  And that is a profound legacy to leave someone.“

When: November 14, 2018. The letter will be officially rolled out on the gym floor in front of the entire school for the “Thank You Letter Day” assembly.

The letter will be one large sheet of paper comprised of rolls of butcher paper taped together. The handwritten letters will be painted in black paint. The thank you letter is addressed to the student’s mom, dad, and teachers and thanks them for everything that they do for the students.

The letter is formatted as an actual letter with the date in the upper right-hand corner and begins with the salutation, “Dear Mom & Dad, and My Teachers.” The actual letter was written by students from the Continental Cursive Club.

The letter ends with “Sincerely” and will be signed by more than 600+ students, teachers, and staff at Continental Elementary/Middle School

World Record Event: This is the first-ever Largest Thank You Letter and thus makes it a world record! It is 85 ft long by 50 ft wide (Size of a Middle School Basketball Court). To document the record, we will lay a 100-foot measuring tape next to the letter and videotape the length and width of the letter. We will also have signed affidavits from the superintendent and principal of the school attesting to the documented size of the letter.

For more information, visit: The World’s Largest Thank You Letter

Why This Event Is So Important:

Carew likes to create “teachable moments” that will inspire kids for a lifetime. With this event, he is creating an opportunity for community togetherness that will teach kids about the importance of kindness, manners, and civility in their daily lives. Carew has been a long-time advocate of cursive writing, speaking and writing extensively about the importance of teaching cursive in schools. He has been a big supporter of the Cursive Club at Continental School.

Carew wanted the “Big Letter” to be authentic in its sound and intent. He wanted kids to write the letter.

With the help of the Cursive Club teacher, Kathy Reiman, Carew had the students handwritten write thank you letters to their parents and teachers. Carew then took their actual words and sentences to which helped created the actual letter itself.

Civics club teacher, Wendy Fanning, had members of the Continental Civics club help construct the letter by rolling out the paper, taping it together, and painting the handwritten letters.

The day before the assembly, all 600+ children, teachers, and staff will sign the letter below the “Sincerely,” at the bottom of the letter.

On November 14, the entire school will have an assembly to officially roll out the letter. Along with Carew, a number of the school’s teachers and staff will speak to the importance of being thankful during the upcoming Thanksgiving break and promoting the school’s values of being kind to one another.

A documentary of the making of “The World’s Largest Thank You Letter” will be available for viewing on November 14th.

Carew Papritz, also known as The Cowboy Philosopher, is the author of the multi-award winning book The Legacy Letters. Though fictional, The Legacy Letters has won acclaim as a life lessons book for all generations, gaining the distinction of being the only book in publishing history to win awards in both fiction and non-fiction categories. A Renaissance Man in an age that lauds the specialist, The Huffington Post says Papritz “intrigues and enlightens, charms and catalyzes change for every reader”.