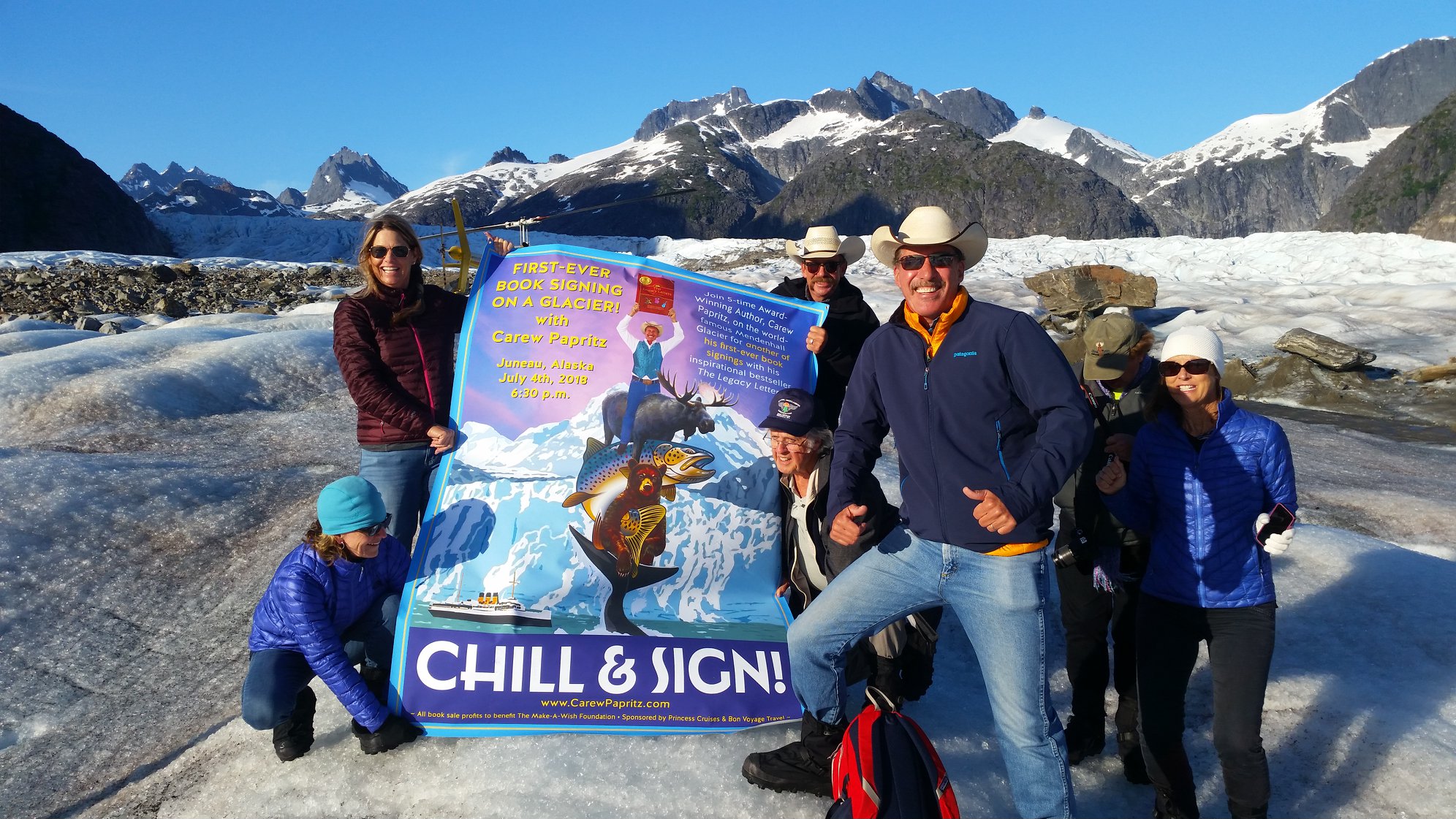 “At the age of 14, I vowed to live life full of adventure, sharing my unusual life stories, love of great wine, and my passion for books.”

This might be the most positive story about a glacier you’ll ever see!

On Independence Day, Carew Papritz, award-winning inspirational author of The Legacy Letters, became the first-ever author to do a book signing on top of a glacier! This one-of-a-kind adventure took place on the Herbert Glacier in Juneau, Alaska along the Alaskan coastline, a stop on the Emerald Princess cruise line where guests were invited to sip, sign, and sail.

The 7-Day cruise took place on July 2nd-July 8th and attracted thousands of adventure loving guests. The event included a helicopter ride to the Herbert Glacier as part of his series of unique “first ever” book signing events. As a former tour guide for Princess Tours, Carew was able to speak with authority on Alaska and all shore excursions while weaving in his knowledge on how to make the most of your time there.

Papritz is one of the most innovative authorpreneurs of the 21st century. With a background in Hollywood filmmaking, Papritz understands the art of drama and showmanship. To promote his book The Legacy Letters, he created numerous dynamic and attention-grabbing publicity stunts which were whimsical, fun, and most importantly…effective. From his unique series of “First Ever” book signings—on top of volcanoes, on horseback, while river-rafting, in post-Castro Cuba, and on Amtrak– to his annual literacy-driven charity event, “The Great Book Balloon Launch,” Papritz is making waves by taking a new stance on self-marketing. Recently his “I Love to Read” video series for kids and adults reached over 1 million views on “CarewTube!”

Carew has found success by connecting with his audience through his passions. The more he shares about his personal life, the more you get to know the meaning behind his book which is “Living a Legacy Life”. Not only has this helped his book sales, but it has given him opportunities to travel and network around the world. Carew is encouraging authors to take the message of their book and live it out in an adventurous and unique way, to set themselves apart in this competitive world.